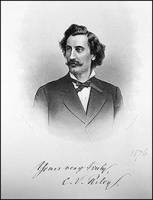 Charles Valentine Riley was the first appointed state entomologist of Missouri in 1868. He served as a non-resident professor and lecturer with the University of Missouri from 1869-1875. C. V. Riley has been called “the father of biological control”. He famously introduced beetle predators to control populations of the cottony cushion scale that were destroying the California citrus industry. Riley is also known for saving the French wine industry in the late 1800’s, which was being decimated by the insect, grape phylloxera. The University of Missouri awarded C. V. Riley an honorary Ph.D in 1873.

2018 – Jared Ali, Pennsylvania State University, “Plant Defense and Multi-trophic Chemical Ecology: Tales of plant interactions with the animals that want to eat them”

2013 – Rebeca Rosengaus, Northeastern University, “Insect Sociobiology: The role of microbes on the evolution of social immunity: disease resistance at the colony level”

Ronald Prokopy, University of Massachusetts, “Insect Behavior: Red, Round and Ripe: A Journey into the Life and Love of Apple Maggot Flies”

1995 – Achievements and Future of the Science of Entomology

Peter Price, Northern Arizona University
“Empirical Research and Factually Based Theory: What Are Their Roles in Entomology”

John Casida, University of California Berkeley
“The Golden Age of Insecticide Research: Past, Present or Future”

May Berenbaum, University of Illinois
“The Image of the Entomologist (Moving and Otherwise)”

Edward Smith, Cornell University
“C. V. Riley: The Making of the Man and His Achievements”